In his interview with Eve Bearne, Gunther Kress argues that literacy is “that which is about representation” (Kress, in Bearne, 2005, p. 288).  Because “literacy” implies something that is mediated through text, in my previous post I questioned the idea of what constitutes a “text.” After further consideration, I feel that representation is the key; therefore, for the purposes of this post I have decided to pursue representation a bit further.

The following two graphics provide a visual model for the way I have come to understand representation through various readings (most notably, those by cultural theorist Stuart Hall). Although these models represent the culmination of my understanding, I thought it would be helpful to begin with these models and then proceed to deconstruct and explain them throughout the post. 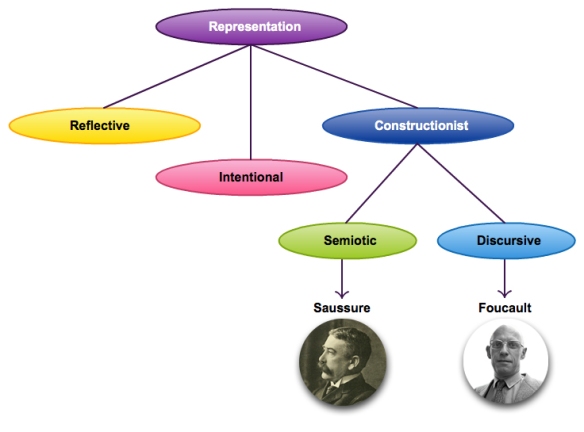 Cultural theorist Stuart Hall describes representation as the process by which meaning is produced and exchanged between members of a culture through the use of language, signs and images which stand for or represent things (Hall, 1997).  However, there are several different theories that describe how language is used to represent the world; three of which are outlined above: reflective, intentional and constructionist.

With reflective approach to representation, language is said to function like a mirror; it reflects the true meaning of an object, person, idea or event as it already exists in the world.  The Greek word ‘mimesis’ is used for this purpose to describe how language imitates (or “mimics”) nature.  Essentially, the reflective theory proposes that language works by simply reflecting or imitating a fixed “truth” that is already present in the real world (Hall, 1997).

The intentional approach argues the opposite, suggesting that the speaker or author of a particular work imposes meaning onto the world through the use of language.  Words mean only what their author intends them to mean.  This is not to say that authors can go making up their own private languages; communication – the essence of language – depends on shared linguistic conventions and shared codes within a culture.  The author’s intended meanings/messages have to follow these rules and conventions in order to be shared and understood (Hall, 1997).

The constructionist approach (sometimes referred to as the constructivist approach) recognizes the social character of language and acknowledges that neither things in themselves nor the individual users of language can fix meaning (Hall, 1997).  Meaning is not inherent within an object itself, rather we construct meaning using systems of representation (concepts and signs); I will elaborate upon these systems further in my second model.  According to Hall:

“Constructivists do not deny the existence of the material world. However, it is not the material world which conveys meaning: it is the language system or whatever system we are using to represent our concepts. It is social actors who use the conceptual systems of their culture and the linguistic and other representational systems to construct meaning, to make the world meaningful and to communicate about that world meaningfully to others.” (Hall, 1997, p. 25)

There are two major variants of the constructionist approach: the semiotic approach, which was largely influenced by the Swiss linguist Ferdinand de Saussure, and the discursive approach, which is associated with French philosopher Michel Foucault.

Semiotics is the study of signs in a culture (culture as language), though the semiotic approach doesn’t consider how, when or why language is used.  Saussure believed that language was a rule-governed system that could be studied with the law-like precision of a science (deemed “structuralism”).  He called this rule-governed structure “la langue,” and referred to individual language acts as “la parole” (Culler, 1976).  Many found Saussure’s model appealing because they felt it offered a closed, structured, scientific approach to “the least scientific object of inquiry – culture” (Culler, 1976, p. 29).

“Saussure’s great achievement was to force us to focus on language itself, as a social fact; on the process of representation itself; on how language actually works and the role it plays in the production of meaning.  In doing so, he saved language from the status of a mere transparent medium between things and meaning.  He showed, instead, that representation was a practice.” (Hall, 1997, p. 34)

With the semiotic approach, in addition to words and images, objects themselves can function as signifiers in the production of meaning (Hall, 1997).  Therefore from this perspective, going back to my previous post, my little book of plant pressings may in fact be considered a text since each little plant was chosen as a representative of an entire species.  Because they were being used to represent certain species, it is not the actual plant clipping itself that carries the meaning, rather it is the symbolic function it serves in generalizing the morphology, physiology, taxonomy etc.

What Saussure failed to address, however, were questions related to power in language (Hall, 1997). Cultural theorists eventually rejected the idea that language could be studied with law-like precision, mainly because language doesn’t operate within a “closed” system as Saussure suggests.  In a culture, language tends to operate across larger units of analysis – narratives, statements, groups of images, and whole discourses which operate across a variety of texts and areas of knowledge (Hall, 1997).

Michel Foucault used the word “representation” to refer to the production of knowledge (rather than just meaning) through the use of discourses (rather than just language) (Foucault, 1980).  His conception of “discourse” was less concerned about whether things exist, as it was with where meaning comes from. Discourse is always context-dependent.

J.P. Gee uses the concept of Discourse to describe the “distinctive ways of speaking, listening, reading and writing, coupled with distinctive ways of acting, interacting, valuing, feeling, dressing, thinking, believing with other people and with various object, tools, and technologies so as to enact specific socially recognizable identities engaged in specific socially recognizable activities” (Gee, 2008, p. 155).  As Foucault suggests in The Archaeology of Knowledge, “nothing has meaning outside of discourse” (Foucault, 1972).

Additionally, for Foucault the formation of discourses had the potential to sustain a “regime of truth” in a particular context.  No form of thought could claim absolute truth, because “truth” was all relative; knowledge, linked to power, can make itself true.

“Here I believe one’s point of reference should not be the great model of language (langue) and signs, but that of war and battle.  The history which bears and determines us has the form of a war rather than that of a language: relations of power not relations of meaning”  (Foucault, 1980, p. 114-115) 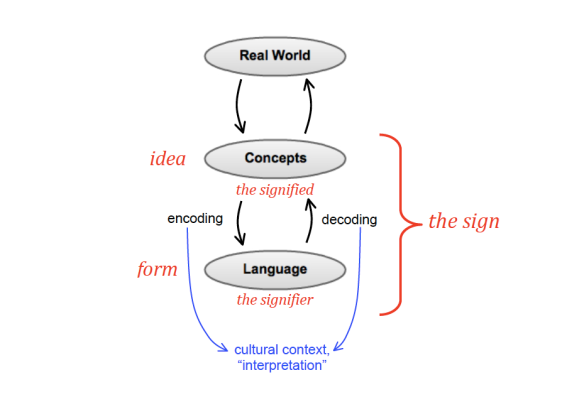 Meaning is always produced within language; it is the practice of representation, constructed through signifying.  As described in the previous section, the “real world” itself does not convey meaning.  Instead, meaning-making relies two different but related systems of representation: concepts and language.

Concepts are our mental representations of real-world phenomena.  They may be constructed from physical, material objects that we can perceive through our senses (e.g. a chair, a flower, a tangerine), or they may be abstract things that we cannot directly see, feel, or touch (e.g. love, war, culture).  In our minds, we organize, cluster, arrange and classify different concepts and build complex schema to describe the relations between them (Hall, 1997).

If we have a concept for something, we can say we know its meaning, but we cannot communicate this meaning without the second system of representation: language.  Language can include written or spoken words, but it can also include visual images, gestures, body language, music, or other stimuli such as traffic lights (Hall, 1997).  It is important to note that language is completely arbitrary, often bearing little resemblance to the things to which they refer.  As Stuart Hall describes:

“Trees would not mind if we used the word SEERT – ‘trees’ written backwards – to represent the concept of them… it is not at all clear that real trees know that they are trees, and even less clear that they know that the word in English which represents the concept of themselves is written TREE whereas in French it is written ARBRE! As far as they are concerned, it could just as well be written COW or VACHE or indeed XYZ” (Hall, 1997, p. 21)

Codes govern the translation between concepts and language.  These codes are culturally constructed and stabilize meanings within different languages and cultures.  (Note: although meanings can be stabilized within a culture, they are never finally fixed.  Social and linguistic conventions change over time as cultures evolve).

Saussure referred to the form, or the language used to refer to a concept, as “the signifier,” and the corresponding idea it triggered in your head (the concept) as “the signified.”  Together, these constituted “the sign,” which he argued “are members of a system and are defined in relation to the other members of that system” (Culler, 1976, p. 19).

In order to produce meaning, signifiers have to be organized into a system of differences (Hall, 1997).  For example, it is not the particular colours used in a traffic light that carries meaning – red, yellow, green, blue, pink, violet or vermillion are all arbitrary.  What matters instead is that they are different and can be distinguished from one another.  It is the difference between Red and Green which signifies – not the colours themselves, or even the words used to describe them (Hall, 1997).

Therefore, going back to my plant pressings dilemma, I am now inclined to argue that my book of plant clippings is in fact a text.  My wild rose clipping, for example, serves as a material “signifier” to represent the concept of “wild rose-ness” (the idea) through its physiological differences to the other plants contained in the book.  Meaning is made through the fact that it represents wild roses – even though I could have chosen any other wild rose plant from which to take my representative sample.  The book itself is transportable and no longer tied to its immediate context of production, which was an important criterion for Lankshear and Knobel’s definition.

However, after compiling this research on representation, I have also come to understand that the definition of “text” is less important than its interpretation:

“There is a necessary and inevitable imprecision about language… There is a constant sliding of meaning in all interpretation, a margin – something in excess of what we intend to say – in which other meanings overshadow the statement or the text; where other associations are awakened to life, giving what we say a different twist.  So interpretation becomes an essential aspect of the process by which meaning is given and taken” (Hall, 1997, p. 32-33).