According to Walter Ong (2002), the word “text” etymologically stems from the root meaning “to weave.”  Robert Bringhurst further elaborates on this ancient metaphor whereby thought was considered a thread and the raconteur was the spinner of yarns, “but the true storyteller, the poet, was a weaver.  “The scribes made this old and audible abstraction into a new and visible fact.  After long practice, their work took on such an even, flexible texture that they called the written page a textus, which means cloth” (Bringhurst, 2004).  Lankshear and Knobel (2007) use the concept of “encoded texts” in their definition of literacy, referring to texts that have been “frozen” or “captured” in ways that free them from their immediate context of production – i.e. they are ‘transportable.’  “Encoded texts give (semi) permanence, transcendence, and transportability to language that is not available in the immediacy of speech, hand signs, and the like” (Lankshear and Knobel, 2007, p. 5).

J.P. Gee defines literacy as the mastery of a secondary discourse involving print, however he is careful to point out that “print” can easily be substituted with other kinds of texts and technologies – including paintings, film, television, computers, telecommunications and other discourse “props” (Gee, 2008, p. 176)

In my new literacies course we explored how a “text” is more than just words on a page, and can include things like images, videos and other multimedia forms that can be ‘read’ or used to infer meaning.  But at what point does something become a “text?”  What follows is a personal narrative that highlights my confusion.

This past summer, I participated as a member of a field research team studying trophic cascades in the southern Canadian Rockies.  My job was, in essence, to “read the world.”  I became skilled in plant identification, measuring annual growth, recognizing whether a plant had been “browsed” (eaten) by elk (which looks much different than if it had been consumed by insects or other species).  I could differentiate whether something was a “herb” or a “shrub” or merely a young tree.  All of these observations weaved into a narrative.  For example, if a patch of young aspen had been heavily browsed, it meant that there were likely few wolf in the area (wolf eat elk, therefore elk would not have stopped for a snack if wolf had been present); if there was a large depression in a patch of herbaceous cover, I was likely intruding into the home of a grizzly.  Therefore I could interpret meaning from and assign meaning to the physical plants in front of me.

These meanings, however, were not “free from their immediate context of production” – so by this definition, “reading the world” does not constitute a text.

[Note: The video above depicts a first-person perspective of the plants I was “reading” within their immediate context of production.  Recognizing the fact that this is a digital reproduction of a lived physical experience, there are obviously several facets of representation that this medium does not permit – e.g. you cannot feel the sopping wet brush, the physical/muscular exertion, or the wind against your skin (though you can probably hear it blowing against the mic).  I took this video solely for the purposes of trying to capture this particular environment – and I am using this video here as a representation of this physical context (“reading the world”) rather than as an example of a “text” itself.]

Later, I decided to become more plant-savvy.  I obtained several plant clippings that were then pressed into a notebook.  I could now take these physical artefacts with me wherever I went (in a book, nonetheless!).  These plants, from which I extracted meaning, were no longer bound to the spot where they were produced – and by pressing them, they were essentially preserved indefinitely.  Moreover, I could take my book of plant pressings and potentially share it with someone else who wanted to learn about the plants of the southern Canadian Rockies.  Was this a text?

These plant clippings were not “codified,” so I am reluctant to consider them as text.  However, Maria Popova, one of the main authors of the “Brain Pickings” blog, wrote an interesting article on “Curation as a Form of Authorship” (Popova, 2011)  She suggests that the act of choosing different artefacts and bringing them together (“curating”) is itself a creative act and should be recognized as a form of authorship (Popova, 2011).  Hans Ulrich Obrist further articulates, “selection, presentation, and conversation are ways for human beings to create and exchange real value… curating can take the lead in pointing us towards this crucial importance of choosing” (Obrist, 2011).  Therefore, perhaps the mere selection and presentation of these physical plant specimens in my little notebook of pressings constitutes a “creative act” or a way of framing – and, by extension, a “text.”

I should also mention that these plant pressings are of great value to me because they are infused with personal/emotional meaning.  They will forever remind me of my summer out west, the wonderful time I had and the amazing people I met.  However, these sentiments are neither transcendent nor transportable to other people – you had to be there to “get” it (or at least the sentimental aspect of it).  So by this interpretation, perhaps my little collection would not be considered a text to most people; to them, it contains no “story” – just a bunch of pressed plants. 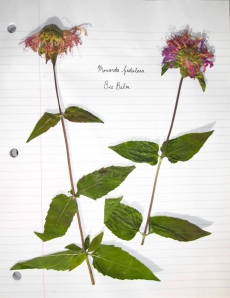 When I got home from my trip, I wanted to somehow copy my little book of plant pressings so that I could share it with a friend who was with me on this field study.  I first decided to photograph each page with my digital camera.  Once I uploaded these images to the computer, they were now infinitely replicable, transportable, and (semi)permanent.  Though they contained no written language, one could still infer meaning from these images – at least for the purposes of plant identification.

The act of removing the plant clippings from their original context had already caused them to lose some of their infused meaning.  By looking at a single plant clipping, one could no longer construct a narrative that included elk, wolves or grizzlies.  The act of transforming these clippings into digital photographs caused even further degradation; now the multi-sensory experience of these plants was reduced to a single way of knowing – the visual.  The Cirsium avense (Canada thistle) and Rosa sp. (wild rose) were no longer prickly to the touch.  The Monarda fistulosa (bee balm) no longer carried the unbelievable aroma of wild oregano.  The pods of the Lupinus argenteus (silvery lupine) were no longer poisonous.

After assembling my photographs, I decided to re-create my book of plant pressings as a series of scientific illustrations using watercolour, pen and ink.  Essentially, I re-drew (to the best of my ability) a new representation of these plants from the physical artefacts.  Although I was once again replicating the pressed plant artefacts, this time the act of representation was an embodied, creative act (rather than a mechanical act, as it was with the digital photographs).

During the process of replicating these plants by hand, I learned more about their morphology and physiology than I could have ever learned from a photograph or a written text.  The process of slowing down and “codifying” these plants, so to speak, forced me to examine these plants much more rigorously and gave myself new meanings and new understandings that would not be permitted through digital modes of replication.

As a finishing touch, I wrote the Latin scientific name and the common name for each plant at the bottom of the page.  While these were the only words I had written throughout this entire journey, I am confident that it was not the only text – though, admittedly, this concept still eludes me.

Popova, M.  (2011).  In a new world of informational abundance, content curation is a new kind of authorship.  Nieman Journalism Lab.  Retrieved from URL: http://www.niemanlab.org/2011/06/maria-popova-in-a-new-world-of-informational-abundance-content-curation-is-a-new-kind-of-authorship/ on 03/29/2012