In the summer of 2012, my cousin Andrew and I accompanied our aunt, ecologist Dr. Cristina Eisenberg, on a road trip from Big Fork, Montana to Fairbanks, Alaska (and back again) to support the data collection for her book, The Carnivore Way.

We spent several days in Denali National Park, working with the park’s Chief Biologist, Tom Meyer.  On our first day in Denali, we performed an aerial survey of the park’s wolves/carnivores from a small propeller plane.  The following day, Tom took us on a wolf-den expedition. In addition to locating several wolf dens, we also encountered the carcass of an alpha female who had died for reasons other than predation (Tom speculated that she died during a traumatic pregnancy; there were no pups).

Dr. Cristina Eisenberg and myself on our aerial survey of Denali

Carcass of an alpha female wolf 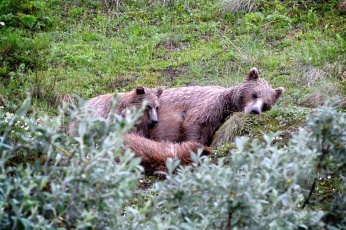 We also spent a few days in Chitina, Alaska, making day-trips to McCarthy and Kennecott.  During our time in Chitina, we stayed in some guest cabins that were owned and built by “Apache Mike” (as he preferred to be called).  Apache Mike moved to Chitina in the early 1980s to live off the land. He built the cabins entirely out of local materials, and lives a subsistence lifestyle, feeding off the salmon, moose and sheep in the area.  For dinner, Mike prepared an unbelievably delicious meal of fresh salmon he had caught earlier that day, and then took us to one of his fish wheels on the Copper River.